The FFPC Footballguys Players Championship is one of the most popular national tournaments in fantasy football today. It is the flagship “mid-stakes” competition at the FFPC with an entry fee of $350 per team. Both slow and live 20 round drafts begin on May 1st for 2022, right after the NFL draft has completed. Prizes are awarded for winning your individual league ( 1st Place  $1,500 cash or free entry into a 2023 FFPC Main Event,  2nd place wins $500), but the goal, obviously, is to make it to the Championship Round of the competition and take down the $500,000 overall prize. In addition to the overall grand prize in 2022, the six figure second place prize has been raised from $100,000 to $150,000. The number of leagues has been raised from 1100 to 1250 to enable this bump. In addition to the massive 2nd place bump, some other notable payout changes include cash prizes paid down to 200th place (vs 125 in 2021), and upping the number of free entries into the 2023 competition from 275 to 500. Teams finishing in 201st – 700th will receive this free 2023 Footballguys contest entry. 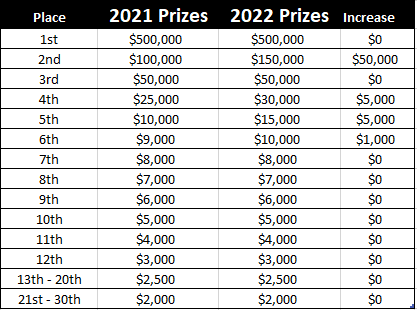 The competition schedule is broken into 3 segments, the same as 2021:

Early drafters in the tournament often consist of the most hard core players of the FFPC. They will hop in early and often during the early months of the draft season. Some of these players will end up with over 100 teams, in the hope of obtaining as many “bullets” as possible to fire in the Championship Round. The player pool tends to widen as the summer months kick in, and the volume of drafts increase day by day. Additionally, draft results tend to vary more as the draft season progresses in lock step with the widening of the players who participate in the drafts. The chart below shows how many drafts were started on a given day during the 2021 draft season. After an initial launch of slow teams (14 on the first day of 2021), roughly 3 – 5 drafts per day fire off until August, when the volume begins to spike and around 30 drafts per day are running in early September during the “Draft-A-Thon” that the FFPC holds where drafts go early morning until late at night. 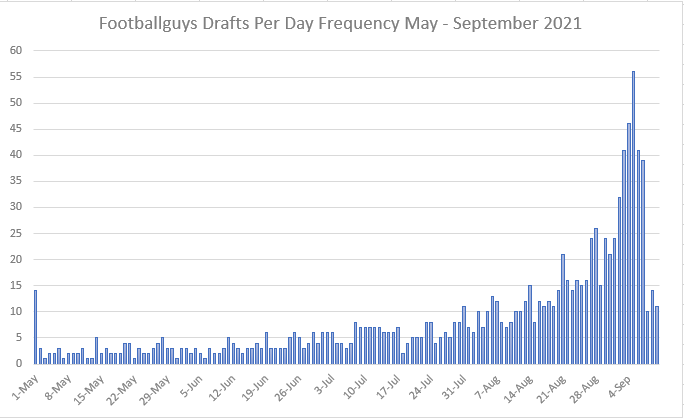 In 2021, the contest was comprised of 1100 individual leagues of 12 teams. The drafts for these leagues were conducted over the course of the preseason, beginning right after the NFL draft in May, and running right up until the Sunday Week 1 kickoff on September 10th. Similar to our Best Ball Analysis, we have examined the drafts of the winning teams in this competition to identify trends on player selection and roster construction.

If you are a new player, the data contained in these reports should help provide you with a framework for drafting in 2022. If you are an experienced player, a lot of what you see may seem like things you already know, but seeing the numbers crunched should confirm a lot of the best practices that you have been implementing when drafting these teams in the past. Also note that unlike best ball, the drafts for these season long contests are only a partial component of overall success. Waiver wire pickups, and weekly lineup decisions also play a huge part, and you may find reviewing the 2021 waiver wire pickups to help provide some guidance there, in terms of how much FAAB is generally required to win players based on the particular week of the season. You can find that data HERE.

The analyses provided here are in the context of making it to the Championship Round. Success during the Championship Round is going to be based primarily on the production of players within that 3 week (15-17) sprint which can be unpredictable. In 2021, there were 2200 teams in the Championship Round. There is a lot of player overlap among the teams obviously. Having the top performers during weeks 15-17 (and actually starting them) is the primary determination of your success there. When you review the “Deep Dive into the Top 5 Overall Winners”, we note a player’s statistical ranking specifically within that timeframe.