Here is a comparison of the 2021 top payouts vs 2022. The bulk of the money has been added to the top finishers, but we now have THREE six figure payouts for top finishers. 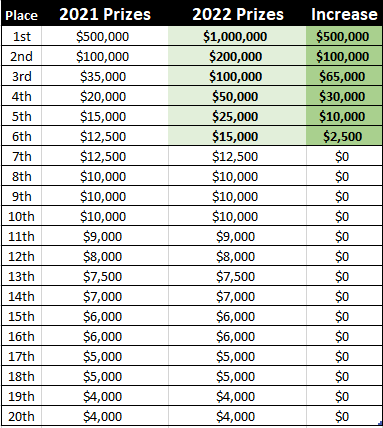 The competition’s schedule is broken into 3 segments :

In 2021, the contest was comprised of 250 individual leagues of 12 teams. The drafts for these leagues were conducted over the course of the preseason, beginning July 4th, and running thru Saturday September 11th, the day before the Sunday Week 1 kickoff. Similar to our Best Ball Analysis, we have examined the drafts of the winning teams in this competition to identify trends on player selection and roster construction. Most of the analysis focuses specifically on what was done during online drafts because data from Live drafts held in Las Vegas is not available. Picks made on giant cardboard grids are not translated to digital format unfortunately. Even so, with so few drafts in Vegas, we have draft data from 86% of leagues to base analysis on where that is needed. Though when it comes to advance rates to the championship round, 100% of the teams are represented via roster capture upon the conclusion of league playoffs.

If you are a new player, the data contained in these reports should help provide you with a framework for drafting in 2022. If you are an experienced player, a lot of what you see may seem like things you already know, but seeing the numbers crunched should confirm a lot of the best practices that you have been implementing when drafting these teams in the past. Also note that unlike best ball, the drafts for these season long contests are only a partial component of overall success. Waiver wire pickups and weekly lineup decisions also play a huge part in determining your success. You may find reviewing the 2021 waiver wire pickups helpful to provide some guidance there. You can see how much FAAB is generally required to win players based on the particular week of the season. You can find that data HERE.

The analyses provided here are in the context of making it to the Championship Round. Success during the Championship Round is going to be based primarily on the production of players within that 3 week (15-17) sprint which can be unpredictable. In 2021, there were 608 teams in the Championship Round (about 20% of the overall pool). There is a lot of player overlap among the teams obviously. Having the top performers during weeks 15-17 (and actually starting them) is the primary determination of your success there. Unlike the trendy best ball tournaments in the fantasy world these days, this is not a week by week elimination. Your total points accumulated over that 3 week period is what counts. When you review the “Deep Dive into the Top 5 Overall Winners”, we note a player’s performance at a position specifically within that timeframe.
Enough of the chit chat, let’s look at the data! (FYI, the analyses themselves are premium subscriber material)