To help guide potential and current subscribers about the features available here at FantasyMojo.com, we’ve put together this “Virtual Tour”, going over what we consider to be the “Top 10” features of the site, and how you can leverage them in preparing for your drafts. The (mostly FFPC) resources and content are vast, so we hope this helps you better utilize the site.

ADP is our claim to fame, and we were the first site to publish FFPC ADP.  It’s gotten more refined over the years, but we provide recent and prior months ADP for virtually every format that the FFPC provides. These include:

ADP data is provided in a color coded table, sortable by any column listed within the table. By default, the list is sorted in overall order, but many times people prefer to sort the list by position rank (just click on the header). Our ADP data is refreshed daily, to incorporate any draft activity since the last ADP tables were generated.

Clicking on a player name within the ADP chart links you a scattergram chart which plots the exact picks in drafts that the player was selected throughout the year in that format.  Here is the 2020 chart for Antonio Gibson in 2020 Footballguys drafts: NEW for 2021 are ADP draft boards, which were requested in the past, but are now available.  The unique thing about our ADP draft boards, versus other ones we have seen, is that our format has EVERY player represented within the confines of a draft board that matches the number of rounds defined by the format.  For example, our 28 round Best Ball ADP Draft Board shows exactly 28 rounds. When you get to the later rounds in a draft, from an ADP perspective, more than 1 player will correspond to a particular ADP slot. This is because player selection in later rounds varies quite a bit from draft to draft. You might have 20 players falling into the same round in terms of ADP. The dart throws and reaches can be very different. If you have 4 or 5 players currently going at the 26.08, for example, we list all of them within that spot in the grid. Other ADP Draft Boards we have seen show only 1 player per box, which means they either have to truncate the list of players OR extend the draft board beyond the number of rounds that are specified. For example, they may show a board that is 35 rounds for the 28 round Best Ball format.  It’s important to have the players represented at the appropriate draft slot, if you are using these boards as a draft aid, and mark off players as they are selected in a draft. Shown is an example of our ADP Draft Board for 28 round Best Ball. Note the multiple players shows in rounds 23 and beyond While ADP can be a great tool for tracking player values at a high level, many times it is useful to look at the actual draft boards of ongoing and completed drafts. Doing this allows you to actually dive into roster construction techniques being used by players, and see how drafts evolve. Where do “runs” on positions occur?  We provide the draft boards for EVERY FFPC draft conducted on line.  These are updated every morning, but also often refreshed multiple times per day, which is especially useful during parts of the year where there is concentrated, heavy drafting, such as Dynasty Rookie Draft  or Footballguys Draft-A-Thon season. Our Draft Board master page lists all of the ongoing and completed drafts in an indexed table format, most recent drafts at the top.

Every draft provides a link to the draft board. You can also view the draft results in tabular format, or review the rosters. This particular board shows a Slim Best Ball draft where Team 12 thought it was a good move to draft 6 quarterbacks on his 18 team roster. (Not even a good idea in Superflex. Come on man!)

This is one of the lesser known features of our site. If you are a subscriber, you have access to a report which shows your player exposures in drafts for all of the drafts you have entered in the FFPC for the current year. Links to this report are listed on the Login page of the site. We also break down the percentages by contest type as well. For example, you may have a 15% ownership of player X in Best Ball, but perhaps 25% ownership in Footballguys Players Championship leagues. This report is also color coded and sortable by any column in the report. Once again, the report is refreshed each morning so you have up to date player ownership data each day. This allows you to keep on top of how much exposure you have to players. You may be overweight or underweight on players, and not even be aware of this. This is very important if you like to maintain diversification across your teams.

Shown is the year end report for 2020 for our own teams. (No laughing, we actually had a very good year in 2020. It’s actually pretty cool to go back and look at who you were targeting at year end and see where you guessed right or wrong). You’ve likely seen us on Twitter commenting on who the hot waiver adds and drops were the morning after an FFPC Waiver Wire run. As the season progresses, every waiver wire run, for every format that processes waivers, is summarized and indexed on our Waiver Wire Results page. If you are new to the format, you can get a better handle on what the prices for players will go for. The detailed reports show the low, high, and median bid, as well as plotting the bids within intervals from 1 – 1000 FAAB dollars. Another cool way to leverage these reports is to use them as an indicator of who high stakes players are targeting in a given week and use this as a guide to make bids or adds in your non FFPC leagues which might have owners that are not as savvy. This is one of our favorite parts of the site. The details on which teams cashed in virtually every league is available for review across all formats. The pages within this section list the names of the teams that won, in which league, what place they finished, and what the prize was. Additionally, you can directly link from the winner list to the actual draft boards, beginning rosters, and end of year rosters to see what a team did during the draft and how the team evolved over the course of the season (especially useful in dynasty). Ever wonder who the most successful high stakes players are who win consistently? If they use a common team name, it’s easy to find out. Sort the winners table and see who shows up repeatedly. Shown here is a portion of the Main Event winners prize page for 2020. Each year, immediately following the conclusion of a season, we will run the numbers on the outcomes of Best Ball leagues and provide results on what the winning approaches were from a variety of perspectives. These analyses typically cover Best Ball, Superflex Best Ball, and Best Ball Slim. In most cases we have provided the data for the past 4 years, back to 2017, and present the results side by side to help identify the trends over time. What worked one year, may not in another. Easy to see this when the data is stacked side by side.

7. Stack Finders for the Footballguys and Main Event Leagues

Stacking is a popular concept in the season long high stakes tournaments. Our “Stack Finder” tools were introduced for the 2020 drafting season. These interactive visual tools allow you to dive into the rosters as teams are drafted in these national tournaments and see how many teams may own a particular combination of players. Whether the stacks are from the same NFL team (Mahomes, Kelce, CEH) or on different teams (perhaps CMC / Aaron Jones), you will be able to extract this information and target some stacks, or combinations of players, in a draft that are perhaps lesser owned across the tournament.

Access to historical FFPC data from previous years is provided, going back all the way to 2010. For each year, you can access the league data as we processed and collected it for that year.  This includes the  ADP, draft boards of all leagues conducted online, waiver wire results, and any other analyses that we may have put together for that particular season.

We are the creators of the Pros vs Joes Best Ball Challenge, which is a mini-tourney which pits industry analysts against the players of the FFPC in a series of Best Ball drafts to find out who the best drafters are.  We maintain a historical leaderboard of the competition with overall rankings. 2021 will be our 13th year. It’s fun to go back and see if your favorite high stakes player or analyst has participated and what their track record is. Over 500 participants are listed. You can also dive in to the draft boards for every draft held in a given year (back through 2017), see the competition “fight cards” for each year which show who drafted, from what draft slot, and what their “Odds to Win” were prior to the draft. (Thanks Javier!).

The last hurrah of every FFPC season is  the annual Playoff Challenge competitions. Creating a roster of players from a small set of NFL playoff teams across thousands of entries is a simple task, but how you should approach it is more of a  challenge. To assist, we have the ownership numbers and breakdowns of team entries showing to what extent  rosters were unique from previous years, including the final results of the competitions.  This info can be an important component of determining how you construct your rosters in the current year. Seeing which players were rostered by previous winners, and what those ownership percentages were for those players is key. Data is provided for both the $200 and $35 entry levels, in sortable, color coded tabular format There you have it, our “Top 10” features. You can either be an insider with this data, or on the outside looking in.  In either case, good luck drafting! 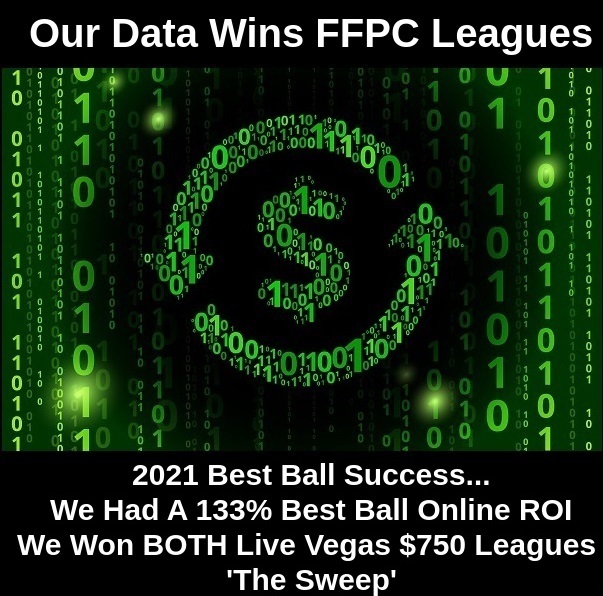 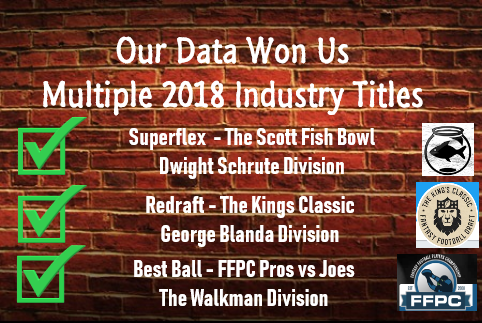